Just want to give you a heads up. This is a much longer post than I usually write. It marks half a year of weekly posts (week 26), so I decided to indulge in a bit of a ramble, and hope you’ll come along.

Yesterday, Kathy Kane’s Writers’ Circle opened a delightfully random trip into my past. She provided the perfect prompt—a YouTube video of Aaron Copeland’s composition, The Quiet City, coupled with the visuals of old photos and Edward Hopper’s paintings.

This is what came:

I don’t know how he does it. Edward Hopper manages to capture that loneliness that permeates the city, the country, the rural, the urban. Even when there are a number of people in the scene, each one seems steeped in solitude.

His work reminds me a lot of my life as a child in Richmond, California. We had a Chinatown across the bay in San Francisco, a long soda fountain in the supermarket, cafes with a counter and round, backless stools. Gas stations with two pumps (regular and ethyl) dotted Highway 99, the north/south route through the San Joaquin valley, where we’d travel to visit old family friends. The days of swamp coolers, when “Air Conditioned!” signs on movie marquees in that valley meant escape from the 100+ degree sidewalks.

Apartments had tile floors. The first home my parents actually owned had three bedrooms and one bathroom. A mother, a father, and four siblings lived there. A single black rotary telephone with a long nylon cord, a gas wall heater in the hall, and a battered secondhand upright piano in the living room. It felt comfortable. 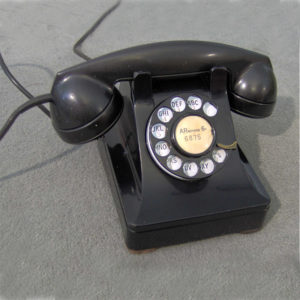 We had a washing machine, but we also had a washboard. It was a big rectangular wooden frame with a metal interior. At first glance it looked like an oversized grater, but the metal part consisted of horizontal ribs rather than holes for cutting. My babysitter would fill the sink with water, stick that washboard in, and rub clothes up and down the metal ribbing to clean them.

Our laundry was hung on a clothesline, which stretched from the porch to the fence at the other end of the back yard. It had pulleys, so you could pin a sheet, a towel, or a garment, then pull the top of the line towards you, and the garment would sail towards the fence. We could get two rows of clothes going at the same time.

Collecting our dry clothes reversed the operation, pulling the lines to the porch, unclipping the clothespins, dropping the clean laundry into a basket, and returning the clothespins to the clothespin bag. I remember that clothespin bag—striped blue ticking on a hanger, with the front hanging open like a kangaroo’s pouch. I wonder now how we ever got dry clothes, especially in the winter. Living across the bay from San Francisco, we had a lot of fog and a lot of rain. Even summer highs hovered around 70 degrees. The day the clothes dryer was delivered, my mother and sister rejoiced.

We were the last family on the block to get a television set. I was five years old. My dad didn’t believe in buying anything on credit. But the clothes dryer and the TV were two purchases my mom made on her own. We kids were always at someone else’s house, watching TV. Maybe that’s why she took that huge step. Or maybe she just wanted her own chance to relax after a long day at work. 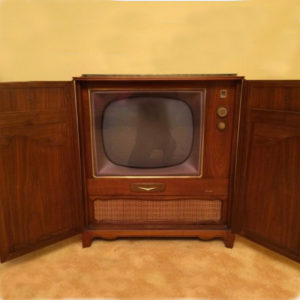 The day the TV was delivered, I was swinging on the front porch rail. Our porch was painted brick red, with black wrought iron handrails. The delivery men huffed and puffed a huge crate up the steps and into our living room. Television sets came in cabinets back then, like a major piece of furniture. You could close the wooden doors and hide the screen.

But because it ran on tubes rather than on solid state circuits, there had to be space for what seemed like dozens of those glass cylindrical tubes. The TV was at least 24 inches deep. And when the picture went fuzzy, we would pull the tubes out of their sockets and take them down to the supermarket, where there was a ‘tube tester.’ We’d stick each one in the proper sized socket, and when the defective culprit was located, we’d buy a replacement tube, take it home, insert it, and hope for the best. Usually, it didn’t help, and the whole process would begin again.

There were also buttons for horizontal and vertical hold. The picture would sometimes roll like the photos on Instagram when an enthusiastic user is viewing photos. The vertical hold would stop the flipping so we could actually watch the show. Horizontal hold kept the dark slashes of zigzag static from streaking across the screen.

When I think of how different my life is now, and how different the childhoods of my grandchildren are from my own, it boggles my mind. Even my profession didn’t exist then. Coaching was limited to sports, and science-based hand analysis hadn’t been discovered.

And at the same time, my Connections Life Purpose did exist, and I’m grateful for the chance to live it even more fully now, in 2016.

How about you? Where have you been? What childhood experiences and memories continue to impress and shape you? And where is your Life Purpose calling you to go?