I have a rather embarrassingly large shoe collection. Perhaps I can blame this on my mother—shoes and groceries were the only things she enjoyed shopping for, so maybe I inherited my love of footwear from her! 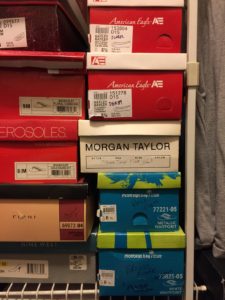 At any rate, as I was dressing this morning, I wanted a pair of shoes at the bottom of a five-box stack. I lifted the lid from that box (with the four other boxes on top of it), pulled out the shoes, and let the lid drop as I reached for a garment on the other side of the closet.

When I turned back, that stack of shoeboxes was no longer nicely aligned. I jiggled with the top boxes, pushed and pulled a bit, then realized that forcing anything on top wasn’t going to have any effect. I needed to get to the bottom of the stack and center the lid on that box. Once I did that, everything else fell into place.

It made me think of how I handle the issues that pop up in my life. I can shuffle and juggle and try to force differences on the surface, but if my internal foundation isn’t flat and stable, all the tugging and pushing and smooshing in the world isn’t going to make things smooth on the top. Instead, I have to make sure what I’m doing on the outside is in alignment with what’s going on inside.

How about you? Are there areas of your life where your internal self is at odds with your outer self? If so, what choices might you make to create more alignment between the two?